I am back at doing them myself again !

I went to two pretty good and expensive salons in my city for about a year and still experienced lifting , which led to me removing the nails and getting them done almost every week .  At my last visit I found green fungus on my nails !!!  I decided to stop going to the salon and start doing them my self again.  First before anything I got rid of the fungus by soaking my nails in Apple Cider Vinegar for about five minutes every night and with in two weeks the fungus was gone .  My nails were still in pretty bad shape , very thin and I still hardly had a strong nail bed to apply polish to.

I resorted to using glue ons , but did not like how fake and thin they looked.  While on Facebook I discovered "Quick Dip" nails and thought I found my dream product.  The dip nails came out nice but they would never hold up , they would lift and I could never get them smooth next to my cuticle .  I used dip nails for quite a while , however they nails would not last for more than a week , by week two I had lifting .   I found myself once again removing the whole set of nails which of course ruins your nails .  So I gave up on the quick dip and decided to go back to gel , I still have my UV light and it still works.

Of course during this decision of went on Utube to see if there were any new tutorials .  I found the "Nail Hub" which was really help ful and by following the directions from the girl on there I was able to do a full sculpted set that lasted longer than a week , I even used my dip color acrylic on them .  One broke , but I was able to build another one rater quickly.   However I grew tired of the color and wanted to change it .  I made the mistake of filing too much off and all the nails broke.   I attempted tips and they broke as well .  Then I resorted to full cover nails ,but those popped off .  I went back to the nail hub and instead of looking at another tutorial I view a Q and A segment which was really helpful.  The nail educator on said something that made sense to me , she said not everyone has the same nails .  Acrylic may work for some people but not for others depending on the type of nails a person has .   Someone with very thin nails or damaged nails may need a more flexible product.  When you are creating a nail enhancement on nails that are really short , (think a nail bitter or broken nails) than the goal to creating a nail enhancement is to help the nail grow back to its correct shape.

I am not one to give up so easily so I tried another set with tips , I used the method I learned on the nailhub , but found I need to do at least three fully cured layers to get a strong nail. I also decided that sense I had so many layers of gel on that I would stick to polish instead .  I also like to use regular nail polish because it is easier to change the colors and match them to my toes.  I grow bored of the same color all the time .

Here is a picture of the nails I did , I decided to do a 4th of July theme because I am hoping that my nails last that long . 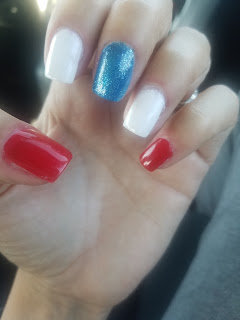 1. Pushed back my cuticles
2. Lightly filed the nail bed
3. Cleaned the nail plate with Alcohol on a nail wipe
4. Applied tips and cut them down to desired length
5. Blended nail tip with natural nail by filing lightly
6. Applied Bonder and cured for two minutes
7. Applied a base coat cure for a minute
8. Applied a thin layer of IBD builder gel to entire nail
9. Applied a ball of gel to the middle of the nail where the stress area is , pushed gel very very slightly to the cuticle area , no touching the cuticle. Then gently moving the gel to the tip of nail , trying to stay thick in the middle and then in the cuticle area and tip.   Cured for three minutes and repeated twice.
10. After my third layer of gel , I wipe off the sticky layer and file lightly to shape and get ride of any imperfections.  Remember only file very lightly , if you push on the file to hard you can file through the gel and cut your cuticles not fun and you end up with a bloody mess .